Seems like it’s been forever since I’ve blogged.  Unfortunately life’s events stole all of my emotional energy plus.  Briefly, here’s a rundown of what we’ve been up to since late Feb.

Moving is stressful enough.  In our case we added to the stress by purchasing a beautiful home that was the unfortunate victim of a bank foreclosure.  Worse than that, the home was missing many of life’s essentials such as a kitchen faucet, shower heads, cabinet hardware, towel/TP holders, light fixtures and appliances.  There’s more but you get the idea.  Kevin and I have been shopping and installing all that was missing from the home. We are on a first-name basis with nearly every employee at Home Depot.

Now that the worst part is over, I’ve been able to spend time renovating my sewing cave which also was a victim but nothing that a little paint couldn’t fix.  Appropriately, you, my sewing friends are the first to see it nearly completed. 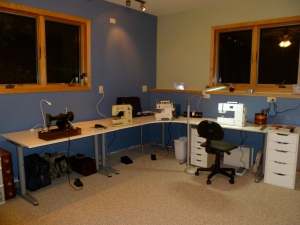 First of all, I am so excited to have a sewing such as this – maybe even a little guilty to think about this type of indulgence.  Now that I’ve said it, I’m over the guilt.

Because the previous owner used this as a “craft” room, it is perfect for a sewing room.  Two walls of counter height and wall cabinets were removed before we purchased the home but the following remained intact:

In addition I was able to add:

There’s more to do such as unpacking the stash, organizing and some items to add:  base boards, wall decorations and closet shelving.  In the several days that the room has been operational, I’ve loved it.  Here are the other views: 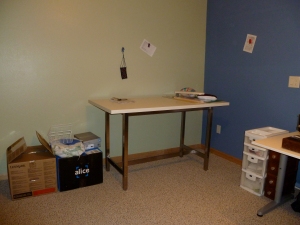 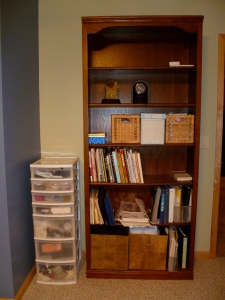 In case you’ve been in the market for an antique or vintage sewing machine and have been unable to find one, I know why. 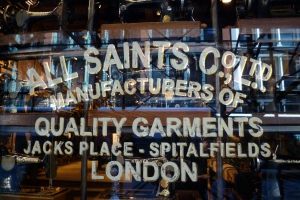 Kevin and I spent this weekend in New York City.  On Monday morning after our visit to the 911 Memorial, we walked through Chinatown and up Broadway toward Soho.  In the midst of the shopping district we walked by Spitalfields; a store that usually wouldn’t catch my eye.  But given that there were about a hundred vintage or antique sewing machines in the window display, my interest was aroused.  We walked into the store and to my amazement, the walls of this otherwise uninteresting store were lined with rows and columns of these old beauties.  Most were Singers but there were a few Pfaffs, Whites or other less well-known brands.  There were also some old industrial machines and spools but neither were as interesting as the hundreds of sewing machines.

Many more than one could photograph…… 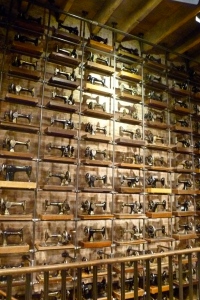 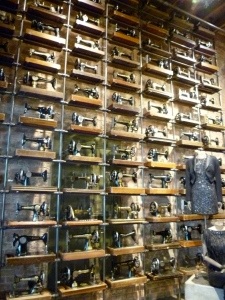 Shamefully, I couldn’t see any attachments in the machine cases.
If you’re a sewing nerd like me, you’ll want to check it out sometime.
September 22, 2011 fabricateandmira1 Comment

Interestingly, one of the blogs my DH Kevin follows is Cakewrecks.  If you’ve not seen it on the web or heard about it on television, it’s a photo blog of professional cake mishaps peppered with cakes where the cake construction is beyond one’s imagination.  For us sewists, these cakes are comparable to an artful couture garment. The cakes below obviously fall into the latter category.

Since September is National Sewing Month, I’m sure these cakes were posted to celebrate our craft.  Yes, they are real cakes.  To give credit to the masterful cake decorators the name of the person who submitted the cake is at the bottom. 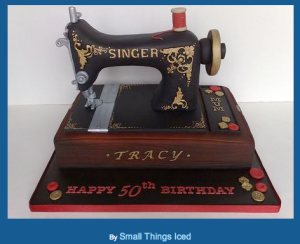 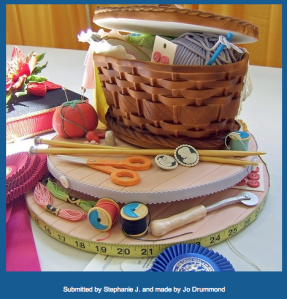 And now a tribute to knitters: 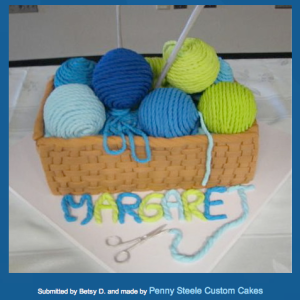 Teaching a child to sew isn’t something I have expertise in, so my efforts with GD Mira are somewhat of an experiment.  Like many experiments or sewing projects there are successes and failures.

Several months ago I proudly blogged about 8-year-old Mira’s first attempt at machine sewing with her mother’s sewing machine.  Sewing lesson #2 was several weeks ago, which from my perspective wasn’t as successful.  Her viewpoint may have been different as the quilt she’s making is now 16 squares and she continues to be quite proud of her accomplishment.

Here’s the story.  Several months ago I bought a Singer Spartan vintage sewing machine for $9.95 with the hope of replacing the motor with a hand crank.  Through a series of unrelated events, this too heavy to be mailed machine was transported from Philly to Mira’s house in Wisconsin.  Prior to our visit several weeks ago I ordered a hand crank for the machine (this little attachment was surprisingly heavy for the size of the wheel – I guess maybe that’s the point).

In case you’re wondering if it’s difficult to convert to a hand crank, it took our technically inclined SIL Stephen about 5 minutes to remove the motor and install the crank.

My thinking behind this was that it would be easy for Mira to use a hand crank machine independently – much like a child’s sewing machine. Additionally I thought possibly the hand-crank machine would make it possible for Caitlin to sew as well – after all if big sister does it, so will Caitlin.  It turned out that I was a little off-base on this thought process. 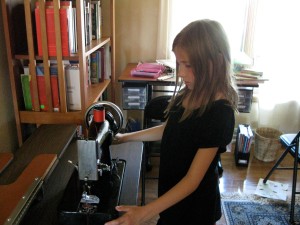 The hand crank was actually difficult for her to maneuver; needing to turn the crank with one hand and guide the fabric with the other was difficult.  Maybe the tension wasn’t set correctly or the needle was too large but at times, the needle didn’t go through the fabric easily which made it even tougher for Mira.  She felt much more competent when she used the electric machine, which she could do without my assistance. 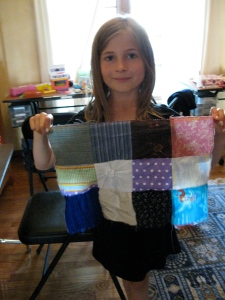 On the other hand, this was a great solution for Caitlin, who now has 4 pieces sewn together.  She loved turning the crank while I held the fabric.

In this case, higher tech was better.  Next time I’ll pull out the electric machine for Mira and will tag-team with Caitlin to use the hand-crank.  This experiment didn’t work as I anticipated but then how would I know if I hadn’t given it a try?

How could I forget?

Last night I blogged about the ever-increasing number of sewing machines now occupying space in our smallish city home and realized that I forgot to mention my beloved embroidery machine.  Sewing for children is much more fun with an embroidery machine – oh, the possibilities for adorable embroidered embellishments.

Bernette 340 Deco, please forgive me for the memory lapse.  Just like my children, I love you all the same.

How many sewing machines does one need?

For my fellow sewists/seamsters, I’m sure you understand my fascination with sewing machines.  For many years I only owned a single sewing machine and it seemed to meet my sewing needs quite well.

I received my first sewing machine from my parents when I graduated from nursing school.  I guess that’s a testimony to my parents’ perceived value and practicality of a sewing machine; for Depression-era parents, a gift would first and foremost need to be useful.  That machine worked well and sewed through anything but didn’t have a free-arm.

In the mid to late 1970’s as I began to sew for our daughter, the absence of a free-arm was enough to send me shopping for a new machine.  This purchase was a Bernina 830 and I was sure that in my whole life I’d never need another machine.  I think I paid about $750 for that machine and today they sell for nearly that much on Ebay.  In fact, next to my husband and children, this machine might be the love of my life.  It now sits in my daughter’s basement closet but last month, I used it to teach Mira to use a machine to sew.  Such fun!

In the early 1990’s I’d never heard of a serger but my sister worked at a sewing store and convinced me that I couldn’t live without one, so on my birthday, Kevin surprised me.  My sister was right – one can’t live without a serger.  That original one has been upgraded and recently I purchased a Babylock Evolve combination serger-coverstitch machine.

After sewing the dresses for Angela’s wedding in 1998, I started hinting that I’d like a new machine with more features. Kevin went to my favorite Bernina store, sought advice from the owner and again surprised me with a new sewing machine.  He did well – a Bernina Virtuosa 150.  It is my current machine.  Today I took it in for cleaning as it’s been working pretty hard lately.   Usually that would mean no sewing for a few days.

Now I have several vintage machines which could act as a back-up. The oldest is a 1897 Wilson and Wheeler Treadle which doesn’t currently work.  About 15 years ago, it was left at my brother-in-laws newly purchased house and he gave it to me.  I really like this machine even if it doesn’t work.  The woman who owned it was a dressmaker, so I can’t imagine how much it has been used.  It has many original attachments in a beautiful carved box.  There’s even a ruffling foot – am sure you needed it in 1897.

The most recent additions were from our local second-hand store.  I paid $59 for the two and had them serviced for another $100 – they both work like a charm.

Now that’s sewing security – never again will I be without a machine.

But I am out of space, so one or two of the seven will need to go.

Wouldn’t you agree that Kevin has been by biggest supporter – so many sewing machines as a surprise gift.  I feel so fortunate.