It’s now been months since we were in Guatemala, but as you can tell by my posts, I continue to be fascinated by the culture.  By no means am I an expert on the “traje”; that is the traditional clothing worn by Mayan women and girls in Guatemala however I’d like to share the little bit that I know. As a fabric lover, it is captivating to see the variety of beautiful fabrics and the proud manner in which women wear their traje.

Even after seeing several photos of women in traditional clothing, you may notice the different skirt and top styles.  Each community has a style which is unique to that area.  For example, in the north (specifically Coban), women wear gathered skirts and lacy tops such as the preceding photo.  On the other hand, in a cooler area such as Santiago Atitlan, the blouses are made of fairly heavy cotton which is then embroidered with birds such as the following photo.

In Antigua and the Lake Atitlan area, skirts are made from a large panel of fabric tied at the waist with a wide hand embroidered belt.  The fabric is made by women in their homes – densely woven Guatemalan cotton in a variety of plaid designs, which also vary by region.   Like backstrap weaving, fabric weaving is one of the ways in which women stay connected to their culture.

In the following photo, I love the hair ribbons woven into the braid.  In Quetzaltenango the skirts are full and have an embroidered band at the knee.  You can also see the hand-woven shawl resting on the woman’s shoulder.

Not surprisingly in this craft-based economy, many of the garments are hand-sewed and embroidered by family members.  I’m not sure about the cost of blouse fabric but we were told that a skirt-length panel of woven fabric costs $40-$80, incredibly expensive in a very poor country.

Unlike Mayan women, it is uncommon to see men wearing their traditional garments.  I was able to capture one example in San Pedro – wool pants with embroidery.  Like with the garments worn by females, the designs vary by community.

One of the most fascinating parts of our recent trip to Central America was the daily shower.  We had been warned about cold showers which are OK in a tropical climate but certainly not in 60 or 70 degree weather.  Here’s a little information about our “shower” experience.  Before I complain too much, this was in large part an outcome of our decision to stay in hostels or small inexpensive hotels.

As a person who loves a very warm shower, I never thought it was humanly possible to enjoy a cold shower.  When I say “cold”, I mean that the water is the temperature of the public water system or whatever type of storage or holding tank is the source for the water, but for me that’s still a “cold shower”.  In Honduras, Nicaragua, Costa Rica, Panama and Cartagena, there were no tears shed at shower time because it was 95 degrees outside – even I will admit that a cooler shower felt good.  To sum it up, we traveled for a full month without a warm shower.  I am still in disbelief that I survived it.

We had so many experiences which are incredibly innovative – often out of need – I think there are quite a few lessons we N. Americans could learn if we could get over the thinking that environmentally conscious solutions would take us a step backward.  For example, when it comes to warm showers, there is an alternative to water heaters which run constantly and burn gas or electricity.  A “suicide shower” is a solution we could adopt.  In fact, here’s a photo of some of the options:

Intrigued and want to learn more?

Often called “suicide showers” by travelers, these showers have a single cold water line coming into the device (in fact, most homes didnn’t have a hot water line, even in the kitchen).  As you can see, the “super ducha’s” are available in a variety of sizes and shapes – some have a wider shower head (but none of them have a Holiday Inn style smart spray!)  A small pea-can sized heater within the shower head warms the water immediately when the faucet is turned on.  There is one caveat – with a small stream of water, the temperature is nice and warm however a higher velocity resulted in cooler water.  On average, the water was warm.

So why the name?  The first time we encountered one of these strange-looking devices, I turned on the water and sparks flew.  It didn’t take an electrical engineer to figure out that I shouldn’t step in.  Instead, I notified the hotel staff and soon a workman came to rewire the shower, which looked something the one below but with more dangling wires.  As we met more travelers, we learned that my experience was quite common.

In one of our homestays, we showered under this modern beauty:

Last of all I want to mention that these showers are no reason to stay away from Central America as a travel destination, in fact it’s one of the dozens of experiences that make it a wonderful travel destination. 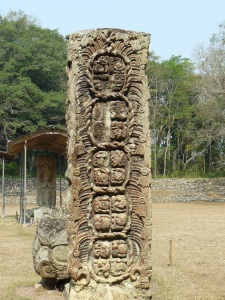 From Guatemala to Honduras

In one day we made the 400 Km. trip from Quetzeltenango, Guatemala to Antigua and then on to Copan, Honduras by way of a shuttle bus.  The ride was boring – sometimes the roads were good.  That means not bumpy or full of pot holes and not riding on steep winding roads.  I guess the roads were bumpy enough, as my bag and one other continued to fall off the roof of the minivan.  Finally one of the other travelers offered up a piece of rope so the driver had enough to adequately secure all of the bags.

One of our general rules is to not get into a town after dark but on this trip we weren´t able to accomplish this as we thought/were told the second leg of the trip was 4 or 5 hours and it was 7+.  The good news is that the trip through the border couldn´t have been easier.

Upon arrival in Copan or Copan Ruinas, a town of about 6,000, the bus driver kindly dropped us off in front of a hotel (likely a friend or connection?) which just happened to have rooms and they had a restaurant of sorts.    As soon as our minibus slowed down,  about 5 members of the hotel family were offering us a room and boasting the wonderful accomodations, hot showers, hammocks, etc.  Tired from a day of travel and not being familiar with the town, we were pleased for the offer, and at a price of $15.00.  That is until Kevin was sound asleep and I couldn´t sleep because it sounded like street traffic was coming right through our room.  Exhausted from not sleeping, by morning I couldn´t wait to hop into the shower.  It was warm for about 5 seconds and then turned ice-cold.  We found a new hotel.

Not having heard much from fellow travelers about these Mayan Ruins, we weren´t expecting to be awed.  Most of this Mayan city has not been excavated but what is there is spectacular.  The beautiful hieroglyphics and estrellas are amazing.  Here are a few photos to whet your appetite for this ancient site. 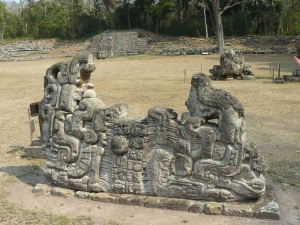 The rest of our short visit to Honduras was quite an adventure and is worthy of a separate post.  Stay tuned.

This morning we awoke to the sound of a soft rain. Good day to chill and read a book and catch up on our diary. “Is this day 7 or 8”, I asked. For a minute I truly was lost in time- what a great feeling. Guess we really are on vacation.

Yesterday morning we left lovely Flores for the 6ish hour ride to Coban in hilly Central Guatemala. We traded tropical weather for a more temperate climate and a very traditional area of the country. In contrast to the more tourist-laden areas, we have seen some but not many cell phones. There are phone booths but local people who need phone service also go to street vendors to make calls. As a way of making a little money, these street vendors carry a standard landline phone with a small antenna. I’m not sure of how the technology works but it’s a great way to reuse all of our discarded phones.

The rain subsided so we walked the city streets for hours, passing through local markets and checking out the city. We ended the day with dinner at a highly recommended gourmet restaurant. Lesson learned; don’t expect to get great American food outside of the USA.